Who doesn’t love raisin toast?!? Well, I suppose someone who doesn’t like raisins would much care for it—but they have to be few and far between.  This is a recipe that I’ve shared a couple times on my blog and on www.kaylahoward.tv and is THE recipe that I use to make our weekly bread.  My family is especially fond of me taking at least one of my 6 loaves, and fashioning it into delicious cinnamon raisin bread.

In fact, I found a way to make PERFECT (IMHO) cinnamon raisin bread!

Begin with a basic spelt bread dough like this recipe that I use.

2-3 T Sunflower Lecithin (optional, but does improve the texture of the loaf)

This is for a Bosch Mixer, you will have to alter it to fit other mixers.  I begin by putting the water, yeast, honey, oil and lecithin into the mixer.  Then I grind my flour.  I grind 8 cups of spelt which produces something like 10-12 cups of flourâ€¦.  I’m not very good about measuring. Next I will add the fresh ground flour, which is warm.  That’s why I start with cold water because overheating is a major cause of bread turning out poorly.  Finally, I add some bread flour and the salt until the dough looks right and passes the “window pane” test.  Then I turn it to speed “2” and let it knead.  When using Spelt, do not knead anymore than 10 minutes, and only 5 minutes if it’s all spelt.

Allow the dough to rise until doubled (or as some of my Skyping clients knowâ€¦ until the lid “pops” off with a loud shot!!)  Then roll out and shape into loaves.  Allow to rise again until well above the sides of the pans then bake at 375 degrees for 35 minutes.

Okay-this is top secret, SHHHH! I discovered, (although I have no doubt someone else has done this as well, I just like to consider it my special idea since I didnâ€™t have any help coming up with it,) a way to make cinnamon raisin bread hold together! Maybe youâ€™ve never made cinnamon raisin bread, but if you have, you know well how it tends to unravel. So…
Using your regular bread dough, take the amount of dough you would use for one loaf, and roll it out into a rectangle. Spread the butter all over the dough, then sprinkle with cinnamon/sugar but NO RAISINS. Now, fold it in thirds one way, then in thirds the other way until you have a small square. Now, re-roll it into a rectangle, (no, the butter doesnâ€™t come through) and spread the raisins on top. Press the raisins into the dough. If you have good, stretchy dough, the butter layer will not break open. Roll up into a log, press and fold the ends under and place it in the pan. Essentially what youâ€™ve done is create a croissant by layering the butter and sugar, then adding the raisins in another layer. Your bread will look very swirly but will hold together.
Proceed as directly in the Spelt Bread recipe to finish! YUM!  We usually make 1 or 2 of these delicious loaves with each batch of bread.

Kayla Howard is a stay at home wife and homeschooling mom who loves online business.  She is a Biblical Health Coach, ISSA Fitness Trainer, Master T-Tapp Trainer, and Young Living Essential Oil Lover . If youâ€™d like to know more about becoming and staying fit and healthy, Kayla is happy to answer your questions! Visit her website: www.kaylahoward.com 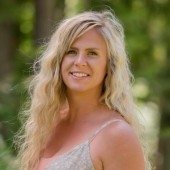 Kayla Howard loves doing business from her home in the woods where she is the master real food chef, homeschool teacher, goat shepherdess, head gardener and holds a certificate of studies from The Pacific Institute of Aromatherapy Her passion is vibrant health in beautiful homes! www.kaylahoward.com

How to Eat Organic on a Budget

This site uses Akismet to reduce spam. Learn how your comment data is processed.

You can find out more about which cookies we are using or switch them off in settings.

This website uses cookies so that we can provide you with the best user experience possible. Cookie information is stored in your browser and performs functions such as recognising you when you return to our website and helping our team to understand which sections of the website you find most interesting and useful.

Strictly Necessary Cookie should be enabled at all times so that we can save your preferences for cookie settings.

If you disable this cookie, we will not be able to save your preferences. This means that every time you visit this website you will need to enable or disable cookies again.